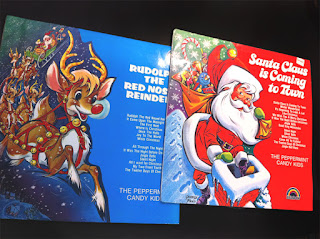 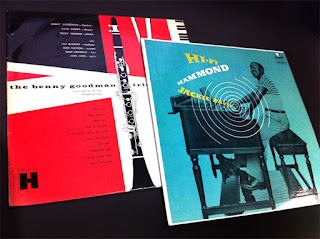 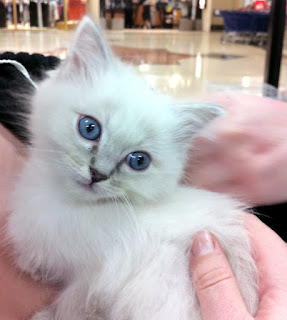 So what do Christmas, kittens and space-age pop have in common? Absolutely nothing! Aside from the fact that they featured in my slightly lacklustre week... Making it suck a little less.

Christmas: I went shopping on William St for records again... This time I also went to the Op-shop and found the Christmas LP's by The Peppermint Candy Kids. We used to have "Santa Claus is Coming To Town" on tape when I was a kid, I think I still have it somewhere... If you can't tell from the illustrations, it kinda sounds like 50's kitsch versions of the classics and it's not awful, as far as Christmas music goes. Not to mention they only cost $1 each!

Kitten: My sister and her boyfriend just got a kitten the other day. That therefore makes me his aunty. So I had to post a picture of him! He's a Rag-doll and he's SOOOOO CUUUUTE! They haven't decided on a name just yet. I LOOOOVE KITTENS!!! ^_^

Space-age Pop: A term used to describe exotic/percussive jazzy lounge music from the late 50's—early 60's, of which I am a major fan. Imagine you were hosting a fancy cocktail party in swanky bachelor pad in the 50's, this is what you'd play. I wish I could find more! The "I Dream of Jeannie" theme song is a good example. It was composed by Hugo Montenegro.
Anyway, on the left we have the Benny Goodman Trio, which isn't Space-age Pop at all. I just put it in there because it had a nice cover. But it is jazz. On the right we have Jackie Davis with "Hi-Fi Hammond". The hammond is a type of electric organ, so imagine if you will, 50's jazz with a hockey game organ! It may seem hard to believe that it could sound so good, but it really does!

Also I'll continue with the Online Shopping series soon... I've got a few more goodies I'm waiting for. They'll arrive within a week or two. Trust me, it'll be awesome!!!